For four years we here at Christmas City Spirits, LLC have worked incredibly hard to bring an entertaining experience to the Inn in the form of a restaurant, Tavern at the Sun Inn and the soon to be distillery Christmas City Spirits. This has been a combination of continually improving what we are doing as a business and incorporating it with the incredible history that the Sun Inn brings with it. These are some exciting times for us as we have begun to distill our first spirts that will soon be available. Like everything thing we’ve done from the renovations to themes for events, we’ve put history at the forefront of our mission and believe that is what will set us a part from most other craft distilleries and restaurants. You may or may not have known but the Moravians had their own distillery at a settlement named Christianbrun in lower Nazareth. Having our interest peaked by the notion, we began researching to see if we could find more about who they were and what they were distilling so that we could possibly reproduce their products in the spirit of history. With the help of Professor Scott Gordon from Lehigh we were able to uncover some really neat and exciting history from the Moravian Archives.

In 1749 The Moravian farming community of “single men” named Christianbrun was established in lower Nazareth along the Monocracy Creek on what is now Christian Springs Road. Not surprisingly, with a community of “single men” at Christianbrun, we found the first brewing and distilling occurring not long after it’s settlement . In August 1757, George Golkowsky produced a detailed survey of Christiansbrun. His survey measured the dimensions of each building, identified the crops that were planted, and sketched the lanes or paths that traversed the community. This information provides us with ample resources to determine the crops grown, in what quantity and thus the likely contents of early distillations. We also found an inventory list of items from the Christianbrun Distillery. Besides brandy which would have been a common German/Austrian spirit, it showed some rather odd items for a group from Southern Germany. This included grain which makes whiskey, Geneva or “Genever” which is a Dutch/northern European influenced predecessor to gin and molasses which would be used for rum distillations, again not of German influence. 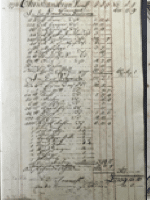 Then we found out why. The Moravian’s were pragmatists, besides the fact that they didn’t drink alcoholic spirits, (beer yes, liquor no.) they made what they could sell out of what they had and what they knew. So (Molasses) rum, being popular in that day, is not a surprising find. Whiskey is not a far stretch as either as it was common to use excess grain and produce spirits, but it doesn’t really explain the northern European influence with Genvere, which was not nearly as common at the time especially in the quantity (225 Gallons!). We then Found the Answer, Moravian distillers weren’t from Moravia. One was Danish and another Polish. This according to records that were discovered indicating some of the brothers names and their jobs.

Christian Matthiesen
1712-1796. Born in Jutland, Denmark. Worked as a brewer and a distiller

Martin Freyhube
1720-1813. Born in Olesnica, Poland. Worked as a waggoner, cobbler, a farmer, and in
the distillery 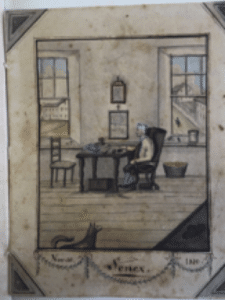 Joseph Levering
1755-1797. Born in Bethlehem. Worked as a gun stocker and as distiller

This would explain the northern influences we see in the inventory which is really cool in our minds. Again being ultimately entertained with history, we at Christmas City Spirits will be using these discoveries to incorporate Bethlehem’s history into our products and look forward to keeping our history alive and enjoying ourselves while doing it.